Rep. Rogers Bashes Iran Deal to CNN: ‘May Have Encouraged More Violence Than We Stopped’
VIDEO

Rep. Rogers Bashes Iran Deal to CNN: ‘May Have Encouraged More Violence Than We Stopped’ 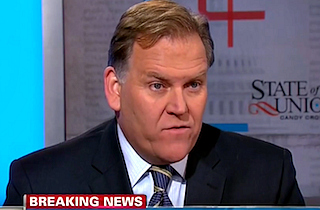 “We have just rewarded very bad and dangerous behavior,” Rogers said. “Think about what this agreement does. It says you can continue to enrich. That’s what the Iranians believe. And they have made no changes—no changes—in the development of their nuclear weapon program, and I can tell that you with a high degree of certainty.”

“So here is the leading nation state of terror,” Rogers continued, “who tried to commit a political assassination right here in Washington, D.C., as they believe can contribute to the deaths of hundreds of U.S. soldiers in Iraq and Afghanistan, who continues to be the main driver between the incredible brutality that’s happening in Syria, very active around the world with other political assassination attempts, and what have we done? We’ve taken away the one thing—we’ve given them enough breathing room—the one thing that brought them to the table.”