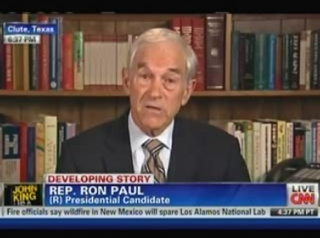 In response to President Barack Obama‘s speech today, Republican presidential candidate Rep. Ron Paul visited John King USA today and gave host Jessica Yellin his response, and he was not happy with the way the executive is conducting business abroad and the increasing national debt. Rep. Paul decried the President’s “fear tactics” used to keep American forces in Libya and took offense at claims that Republicans “don’t think [the debt issue] is serious.”

Rep. Paul began addressing the President’s justifications for remaining in Libya, which he found insufficient as there are a very large amount of murderous dictators on the planet and he could not see America intervening in all of their territories. What’s more, Rep. Paul didn’t believe in the “flip-flopping around” of foreign policy in the past several decades– “it wasn’t so many years ago that we were doing business with [Muammar] Gaddafi,” he argued, adding that “we were on the same side as bin Laden when the Soviets were in Afghanistan” and “Saddam [Hussein] was our best friend in the ’80s.”

But Rep. Paul took most offense at the President, according to Rep. Paul, “imply[ing] that we don’t think it’s serious,” referring to the national debt. What he did believe, he noted, was that “continuing the process is worse than facing the facts.” “He should never challenge us and tell us we aren’t worried about this,” he scolded, adding that “fear tactics are the tool of big government,” and it was said fear tactics that would stall any improvement in the current economic situation.