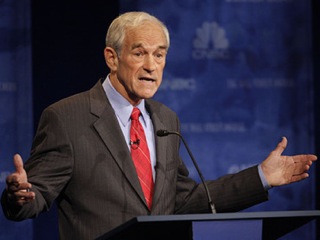 America’s national debt is paramount among the concerns of American voters heading into 2012, and while a huge problem, Rep. Ron Paul debuted a quick fix for reducing the debt by at least $1.6 trillion in one shot. Chatting with Iowa radio host Jan Mickelson yesterday, Rep. Paul recommended the U.S. “declare bankruptcy” and reduce the national debt by dismantling the Federal Reserve, to which we owe upwards of a trillion dollars.

Discussing the problems Greece is currently seeing in their economy, Rep. Paul told Mickelson that America’s per capita debt was not that far off from Greece’s and that America should take note of the protests going on there over the elimination of social programs. He noted that he believed the best option for the nation would be to declare bankruptcy. Given the previous analogy to the United States, Mickelson also asked if he believed America should also go bankrupt, to which Rep. Paul replied, “absolutely” (CNN notes: “Of course, sovereign nations can’t declare bankruptcy the same way a corporation might. Instead, the government would be unable to fulfill its obligations, and would stop making payments on its debt, resulting in a default”).

Mickelson then asked what that would possibly look like, to which Rep. Paul replied that it would be a default, but “the default is happening constantly” without a bankruptcy, anyway. The path on which America is now, according to Rep. Paul, is “the destruction of the currency,” which results in “true chaos,” preventable only by lowering the debt. How does Rep. Paul propose to do that?

I know this is pretty strange for people to even think about this, but we owe like $1.6 trillion because the Federal Reserve bought that debt… They’re nobody, why do we have to pay them off? Why don’t we take away from them and reduce the debt by 1.5 trillion dollars? …We don’t owe that to anybody… They printed the money out of thin air.

The audio of Rep. Paul’s comments (via Mickelson in the Morning) below: