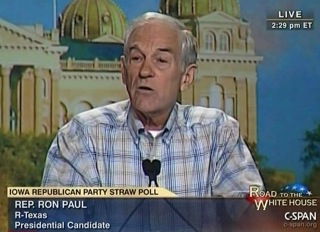 When Rep. Ron Paul took the stage today at the site of the Ames Straw Poll, those who knew of him probably had a good idea of what to expect: bring the troops home, audit the Federal Reserve, and keep the federal government out of people’s lives. They got plenty of the liberty talk, but Rep. Paul threw a curveball to open the game: a strident defense of life as well as liberty, and an anecdote of an abortion so late-term the baby was crying as it was left to die.

“We are identified with one word… the cause of liberty,” Rep. Paul noted, but set liberty aside for one moment to note that he was also strong on defending life, “and I mean all life.” “You have to understand where that liberty and that life comes from. It doesn’t come from our government, it comes from our creator.” He then told a harrowing tale from his days delivering babies as an OB/GYN, noting that when he started the job, “it was a non-issue,” until the 1960s, when he saw someone perform a cesarean section, “lifted out a baby that was crying and threw it in a bucket and let it die.”

Rep. Paul then quickly shifted from abortion to a government “fighting in undeclared, unwinnable wars,” getting back to his bread and butter. “You never have to give up liberties to be safe,” he insisted, opposing further travel restrictions. He wrapped up the speech by blasting the “mischief of the Federal Reserve” to much applause, calling for an investigation into their operations.

The full speech via C-SPAN below: