Rep. Ron Paul Defiantly Confirms To The Media After Placing In NH: ‘We Are Dangerous’ 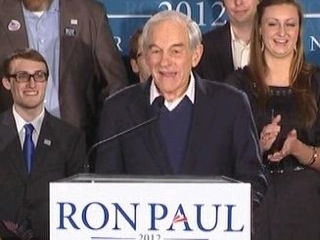 Rep. Ron Paul wants Mitt Romney to know that he is “nibbling at his feet”– figuratively, of course. Rep. Paul considered his second place (projected) finish in New Hampshire a sign that the political momentum of the nation is on his side. Proclaiming it a “victory for the cause of liberty tonight,” Rep. Paul gave an extensive speech on economic policy amid cheers.

Beginning with a round of thank yous to his staff and supporters, and concluding with a thank you to the New Hampshire Union Leader “for not endorsing me,” Rep. Paul declared that he had called and congratulated Romney. “He certainly had a clear cut victory, but we’re nibbling at his heels!” he notes. “There’s no way to stop the momentum we have,” Rep. Paul told the crowd, admitting that “I sort of have to chuckle when they describe you and me as being dangerous.” “They are telling the truth,” he concluded. “We are dangerous to the status quo.”

Rep. Paul hit all of his platform’s most important points: the Federal Reserve audit, high taxes, the dangers of “policing the world,” and received “President Paul” cheers from the crowd the whole way. He called for troops to come home and not to cut “defense,” but to cut the “military-industrial conflict.” He also thanked the crowd and marveled at how young they were. “Freedom is a wonderful idea, and that’s why I get so excited,” he noted earnestly. “Freedom is popular!”

The full speech via Fox News below: