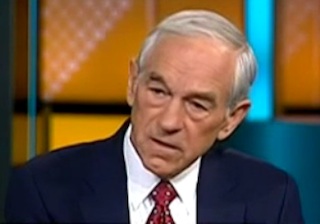 Despite trailing Mitt Romney 685 to 63 in Republican delegates, Ron Paul affirmed he still could get enough delegates to seize the nomination. Appearing on CNBC’s Squawk Box, Paul told the panelists he would not quit the race when it was still technically possible to win. “Theoretically you can,” Paul asserted. “It’s not likely, but you can’t ever tell. Nobody knew Santorum was going to drop out [this month]. But only about a little over half the votes have been counted. When we come up with Texas and California, another third of the votes are yet to be counted so you don’t know. But in theory, you can. In practical counting, I think we’re very realistic.”

“But the one thing that is not practical and is not realistic for the supporters who have encouraged me to do this, would be to say, ‘Well, we’re in the third lap of a mile race, we’re behind. Oh, OK, let’s walk off the field.’ That’s the way they would see that. You don’t quit because you happen to be behind,” Paul declared. “You want to see how you do. And who knows? Maybe somebody will stumble.”

Paul also added that if he failed to get the nomination he would only endorse Romney if he changed policy positions and agreed with the Congressman on “foreign policy and the Fed.”

Watch Paul affirm he could “theoretically” still win below via CNBC: