Rep. Ron Paul Lists Ideal Federal Powers At GOP Forum: ‘Not A Heck Of A Lot’ 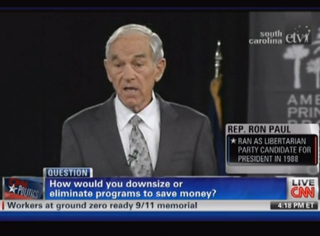 Rep. Ron Paul has openly advocated for an end to paper money, but during the Palmetto Freedom Forum hosted by Sen. Jim DeMint today elaborated he wants more than just a gold standard. After listing the federal powers he would protect (to efficiently answer “what would you downsize?”), Rep. Paul suggested gold and silver “competing currencies,” as opposed to a system where “the counterfeiters are over at the Federal Reserve.”

Sen. DeMint began the conservation asking the Republican 2012 candidate which federal programs he would downsize, to which Rep. Paul laughed, “it’s a difficult question, because that’s a long list.” Instead, he answered as to the things he wouldn’t downsize: “a system of sound money, property rights, contracts, a judicial system, a government, a defense of this country… but not a heck of a lot else.” He particularly attacked the fact that, in our federal government, “100,000 federal bureaucrats [are] carrying guns… people are supposed to carry guns, not the bureaucrats!”

Rep. Paul’s “jobs plan” was similarly large in scope, as his reply involved a long explanation of Keynesian economics and a suggestion to “let the troops come home and spend their money here,” instead of “subsidizing the welfare state of Germany and Japan as well as South Korea.”

As Rep. Paul spoke for about fifteen minutes, he answered a large range of questions besides these, including questions about abortion rights and repealing entitlements without hurting the underprivileged. The full scope of his answers via CNN below: