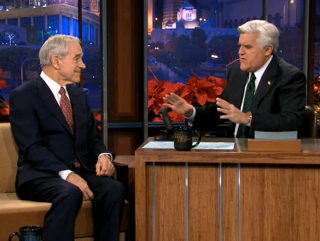 Rep. Ron Paul may stick to advancing his own positions during debates and letting others do the sniping, but he took a detour on last night’s Tonight Show in a rapid-fire round where Jay Leno asked him to comment on each candidate in term. While he had some nice things to say about Jon Huntsman, his reactions to Newt Gingrich and Rep. Michele Bachmann were particularly harsh, the latter of which he noted “she doesn’t like Muslims… she wants to go get ’em.”

After some chat about the appeal of his ideas to young voters (which he attributes to young people being “more principled”), Leno did his usual round of rapidfire answers for Rep. Paul about other candidates, which began diplomatic and got increasingly… let’s say, honest. “Maybe that’s what he should stay as, governor of Massachusetts,” he said of Mitt Romney, though adding that he was a “nice guy.” Of Gingrich, he answered similarly that he should “run for Speaker of the House again.” With Rep. Bachmann, he was less sympathetic. “She doesn’t like Muslims,” he said, shaking his head. “She hates Muslims, she wants to go get ’em.”

As it was a quick round of questions, Leno moved on to “thoughtful person” Jon Huntsman before going on to Rick Santorum, who Leno noted that it appeared “gay people, it’s the end of the world for him.” “Gay people and Muslims,” Rep. Paul added.

The rest of the interview centered around Rep. Paul’s semi-feud with Donald Trump, who Rep. Paul noted, somewhat jokingly, that “he was very much offended [by me], so I’m getting a little bit worried,” and whether he would consider a third party run, a question he defined was “way premature.”

Rep. Paul also ends up revealing who his favorite president in history is, and it’s rather a surprise: Grover Cleveland who, while a Democrat, “loved to veto bills and believed in the gold standard.”

The interview via NBC below: