Rep. Ron Paul To Terry Moran On Whether He Sees Himself As President: ‘Not Really’ 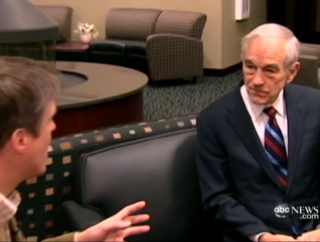 Ask any supporter of Rep. Ron Paul— and even some of the Republicans competing for the presidential nomination against him– and they will tell you that the Congressman is nothing if not sincere. So perhaps it isn’t much of a shock that, when asked whether he sees himself in the Oval Office when he goes to sleep at night, he answered that, honestly, “not really,” and that he sometimes jokes that, more than an aspiration, “it’s a risk that I take.”

On Nightline, Terry Moran gave on final pre-Iowa dispatch discussing everything from the surge in support for Rick Santorum— who said he felt good about the campaign “for the last couple of weeks” to Paul’s support. Moran notes that he felt like “the oldest person there” when going to a Rep. Paul rally, and asked the Congressman whether he had an explanation for why his voter base was significantly younger than the other candidates’. “Freedom is a very young idea,” he told Moran, adding that he hadn’t quite “figured it out yet,” but believed “young people are more open to consistency and principle.”

Moran then asked him how he assessed his chances– or, rather, whether, “when you lay your head on the pillow at night, do you see yourself in the Oval Office?” “Not really,” responded the candidate, “but I think it’s a possibility. Sometimes I kid about it and say, ‘that’s sometimes the risk I take.'”

Moran declared this “an amazing admission” for a presidential candidate, which, yes, Rep. Paul’s reluctance is something strange when he, as a candidate, cannot ask for the same from his supporters. But the question was phrased in a way that made it a bit of a catch-22: if Rep. Paul said “yes, I see myself as President every night before I lose consciousness,” he could risk coming off as ambitious or arrogant or slightly otherwise Newt Gingrich-y, so he may have been taking the safe route by not admitting to dreaming about ruling the free world every night.

The Nightline segment via ABC News below: