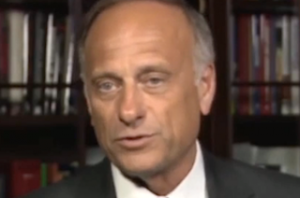 When ABC Univision host Jorge Ramos grilled Rep. Steve King (R-IA) for comparing immigrants to dogs in a year-old video this past Sunday, he likely hadn’t seen this clip from an interview King gave just last week to Newsmax. In the far more recent video, King says undocumented immigrants are primarily “130 pounds” with “calves the size of cantaloupes because they’ve been hauling 75 pounds of marijuana across the desert.”

King said he does have “sympathy” for the, in his view, small number of “kids who were brought into this country by their parents, unknowing that they were breaking the law. Of the 11 million undocumented immigrants in the U.S., King admitted, “Some of them are valedictorians—and their parents brought them in. It wasn’t their fault. It’s true in some cases.” But, he added, “they aren’t all valedictorians. They weren’t all brought in by their parents.”

“For everyone who’s a valedictorian, there’s another 100 out there that–they weigh 130 pounds and they’ve got calves the size of cantaloupes because they’re hauling 75 pounds of marijuana across the desert,” King said. “Those people would be legalized with the same act.”

Until those promoting immigration reform can “define the difference between the innocent ones who have deep ties with America and those who have, I’ll say, been undermining our culture and civilization and profiting from criminal acts,” King said, “they should not advocate for amnesty for both good and evil.”

The congressman has not always had so much “sympathy” for those “valedictorian”-style immigrants. Just last month, King tweeted that “20 brazen self-professed illegal aliens” had “invaded” his DC office after a group of recent college grads showed up to ask him why he opposed the DREAM Act.