Rep. Trey Gowdy Hammers Fast And Furious Hearings: ‘This Is Why People Don’t Like Congress’ 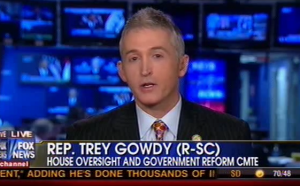 Rep. Trey Gowdy (R – S.C.) was a guest on Fox & Friends Friday morning, and took the opportunity to blast both the Inspector General and Congress for an incredibly slow-moving process that has become, in his opinion, overly politicized. Gowdy, a former prosecutor, expressed dismay at not being able to get information from the Department of Justice in a timely manner.

“I understand there are 80,000 documents that your committee wants the Department of Justice to turn over, and up until this point, they have not,” host Gretchen Carlson asked. “Why?”

“That’s a great question,” Gowdy replied, “and the next time you have a chance to talk to Attorney General Holder, I hope you’ll ask him that. He’s invoking or hiding behind something called ‘executive privilege.'”

“We’re going to get those documents,” Gowdy later added, “it’s just a question of whether he wants us to do it the easy way or the hard way.”

Gowdy then expressed amazement at how “you can do something wrong” with plenty of evidence to back it up, and still not be punished for it a year later.

“You have a dead border patrol agent and hundreds of dead Mexican citizens and it’s been a year!” Gowdy said. “There have been continents that have shifted in less time than it’s taken this Inspector General to answer some pretty simple questions.”

Carlson then asked how a report released by Democrats could differ so starkly from the Republican report.

“Welcome to Washington,” Gowdy replied. “And if your Ambien prescription runs out, I would recommend that you read the minority report. It’s short on facts. It’s 60-something pages long. This is why people don’t like Congress or the institutions of government.”

Watch a clip of Gowdy’s interview below, courtesy of Fox News: