Rep. Waters Pushes Back At Obama During Black Caucus Talk: ‘We’re Getting Tired’ 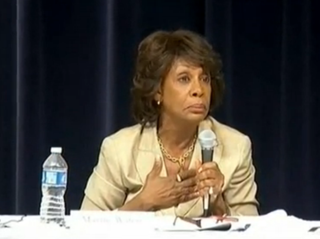 It’s town hall season, and the Congressional Black Caucus is the first this year to get a mouthful from frustrated constituents on the economy. In a clip that quickly made the rounds in the news cycle, the panel meeting the Detroit crowd yesterday defended the President’s work, but with a bit of malaise, as Rep. Maxine Waters argued they were “getting tired” and “don’t know why on this trip… he’s not in any black community.” That the President is having trouble with his most loyal constituency is already being touted as a sign that 2012 isn’t going to be a Democratic cakewalk.

At some points during the public meeting last night, the mostly black crowd became so agitated the representatives found difficulty speaking– this was certainly the case as Rep. Waters explained to the crowd that she believed “we’ve got to put pressure on the President, because you all love the President.” She said she understood the hesitation on attacking him, but then lay into the President once she got the crowd to settle, wondering where his economics plan was and lamenting that his August bus tour did not include any black neighborhoods:

“The Congressional Black Caucus loves the President, too. We’re supportive of the president, but we’re getting tired. We’re getting tired. And so, what we want to do is, we want to give the president every opportunity to show what he can do and what he’s prepared to lead on. We want to give him every opportunity, but our people are hurting. The unemployment is unconscionable. We don’t know what the strategy is. We don’t know why on this trip that he’s in the United States now, he’s not in any black community. We don’t know that.”

The frustration among members of the black community seemed to reflect to some in the media why the President’s approval ratings have been dwindling in such a dramatic way recently, such that his core support group feels alienated has he tours rural communities where he has never had a solid following and has already encountered some trouble with the local Tea Party leaders there. As panel moderator Jeff Johnson explained in his wrap-up, “the ‘hope and change’ message that rallied support from African-American communities in Detroit and beyond is long gone. Many are unclear what message can motivate this base to the polls again, while so many are suffering under a devastating economy and the reality of unemployment.” This, “exacerbated by the fact that at the same time the CBC Detroit town hall was taking place, the president was in Iowa dealing with the issues of rural Americans,” gave the panel, to its host, a new sense of urgency.

Meanwhile, the news was covered on the cable networks as a sign of concern for the President. On MSNBC, Chris Jansing hosted a discussion with Roll Call‘s John Traynham and MSNBC contributor Karen Hunter, the former who found that “it’s not by chance” the President was traveling to rural swing states– he has a serious problem among “rural white voters”– but the frustration due to the high levels of unemployment was palpable. Meanwhile, Fox News’ Megyn Kelly checked in with White House Correspondent Ed Henry, on the road with the President in Iowa, both of whom agreed that it was “extraordinary” to see the people who voted in the highest percentages for the President so raucous at a meeting featuring mostly Democratic Obama supporters.

Rep. Water’s statements, followed by commentary from MSNBC and Fox News, respectively, below: