Rep. Weiner: Americans Want Tax ‘Fairness Even If It Means [They] Have To Pay A Little More’ 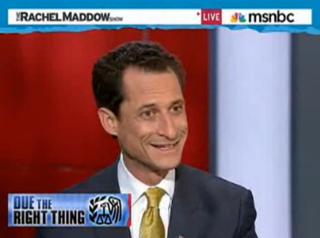 While April 18th is technically America’s Tax Day this year, most cable news shows had a little bit of a celebration Friday night, Rachel Maddow being no exception. Guest host Chris Hayes took a look at the reality of the federal tax system and, along with Rep. Anthony Weiner, delicately made the case for raising taxes.

After an extensive introduction explaining how the tax system currently works and how raising them slightly would go a long way in lowering the national debt, Hayes turned to Rep. Weiner. Before that, however, he had a message that he believed no public official would say: “We’re just going to have to pay a little more to make sure that we have the social contract we deserve.” Rep. Weiner did, in fact, abstain from putting it quite like that, instead juxtaposing his take on taxes to that of the Republicans. “They never have been comfortable with Medicare, or Social Security, or any of these programs that create a social safety nets,” he argued, which makes their support of lower taxes make more sense. However, what they don’t realize according to Rep. Weiner, is that “the tax burden gets redistributed without noticing” and people end up paying more for the same services through the private sector, particularly with health care. To prevent that from happening, “we have to assume some responsibility on a national level.”

Asked whether people legitimately feel overtaxed in his opinion, Rep. Weiner responded that, obviously, “no one when you ask them says, ‘I want to pay more taxes.'” That said, he argued that what the average American would like is “some fairness to the thing, even if it means I have to pay more.” Unfortunately, according to Rep. Weiner, the desire to be taxed fairly has led to a “corporate interest wealthy people movement”– the Tea Party– that to him is counterproductive.