Rep. Weiner Gets A Freebie: Jon Stewart Reflects On How ‘Ripped’ His Friend Is 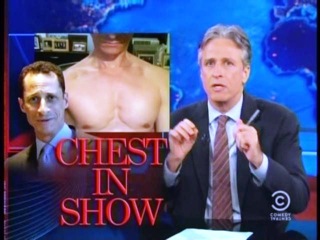 Talk about friends in high places: Rep. Anthony Weiner spent the day telling the media that he had lied to them and his constituents, and that he routinely sent racy pictures of himself to young women. While this is the sort of story that typically has the Daily Show writers licking their chops, tonight Jon Stewart went easy on his old friend, harping on how “ripped” his chest is instead of the fact that he called the police on journalists looking for answers.

Christening what most of the press has to date been called “Weinergate” “C*ckshot 2011,” Stewart took jabs at the initially released photo (“that’d better be his shoulder”) and made a fairly innocent joke about Rep. Weiner’s chest being so buff that James Franco was stuck inside it. Then he went straight to the press conference and compared Andrew Breitbart to Kanye West for appearing before Rep. Weiner, and called the entire scandal “the best episode of Maury ever.” Then he began a series of jokes about John Edwards before turning to an extensive segment tearing into Sarah Palin for her Paul Revere gaffe.

Yep, that’s it. Just as a refresher, Stewart’s reaction to the Eliot Spitzer scandal was an extensive monologue where he called the governor at the time “Johnny Whorebags” and gave Rep. Chris Lee the full slow-jam treatment. In Daily Show terms, getting praise about your body is about as clean as you could emerge from a segment on a sex scandal.

The segment via Comedy central below: