Rep. Weiner Mocks Reporter: You Did Not Just Say ‘The Long And Short Of It,’ Did You?’ 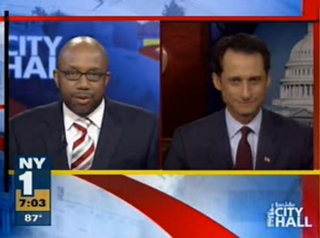 The Rep. Anthony Weiner media blitz that has consumed this half of the week continued today on NY1, where the Congressman got a chance to address his constituency but showed a flicker of exhaustion at the interminable “Weiner” jokes to which he has been submitted this weekend. After an introduction where Inside City Hall host Errol Lewis gave the viewers “the long and the short” of “weinergate,” Rep. Weiner had to ask: “You did not just introduce that by saying ‘the long and short of it,’ did you?”

Weiner has had a long day of interviews, beginning with MSNBC’s Luke Russert, CNN‘s Wolf Blitzer, and continuing later tonight with Rachel Maddow. In between, the Congressman dropped by local media to explain himself to his constituents, and the stress of the interminable mockery appears to have gotten to him, at least a bit. The irreverent rhetorical question was followed up by a subtle double entendre of his own (“this thing popped up,” he explained of the photo), so whatever immediate ruffling occurred seems to have subsided quickly. Rep. Weiner also explained that, while he happened to be on his Twitter account at the time, he did not see the transfer after deleting it. “I did not send it; she did not get it,” he asserted of the woman to whom the photo was allegedly dedicated. “This looks like a prank,” he concluded, “but it is a prank that has gotten an enormous amount of oxygen and attention, for reasons that I contributed to but are still hard to explain.”

The segment via NY1 below: