Rep. Weiner On Cyber Attacks In 2009: Not ‘Pranks,’ But Threats Demanding ‘Immediate Action’ 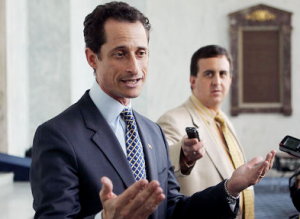 A voice to add to the chorus calling on Rep. Anthony Weiner to take cyber security–and the alleged hacking a Congressman’s Twitter account–seriously? Anthony Weiner. The archives of the New York Daily News serve up a bland policy statement Weiner made in 2009 that suddenly seems newsworthy: “”Cyber attacks–both foreign and domestic–are real and demand immediate action,” Weiner said almost exactly two years ago. This would seem to conflict with the Rep. Weiner who met reporters Tuesday, who described what he says was the “hacking” of his Twitter account as a “distraction” and a “prank.”

Back in 2009, Weiner seemed to take the protection of the country’s information grid far more seriously–though he cautioned against giving too much power to the NSA. “We need a balanced approach. It is important that we don’t give too much authority to a government agency that collects information and rarely shares it.” As the Daily News’ Michael McAuliff reported then, one of Rep. Weiner’s concerns with added NSA power over cyber security is the agency’s lack of jurisdiction over domestic cyber attacks, which Weiner described–then–as significant.

In February of 2009, President Obama directed the NSC and Homeland Security Council to conduct a 60 day review of the “plans, programs, and activities underway throughout government that address our communications and information infrastructure (i.e., “cyberspace”), in order to develop a strategic framework to ensure that the U.S. government’s initiatives in this area are appropriately integrated, resourced, and coordinated. Threats to the information and communications infrastructure pose one of the most serious economic and national security challenges of the 21st Century for the United States and our allies. In this environment, the status quo is no longer acceptable, and a national dialogue on cybersecurity must begin today.”