Rep. Weiner Tells Maddow Twitter Photo ‘Maybe Started Out Being A Photo Of Mine’ 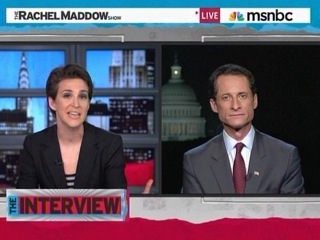 Rep. Anthony Weiner finally made his last media stop of the day, this time sitting down with Rachel Maddow— who interviewed Rep. Weiner just as his Twitter account released a skimpy underwear photo. Maddow was by far the least combative of his interviewers, and the approach seemed to have paid off. This time, instead of “I don’t know,” the Congressman told Maddow that it is possible that the photo was of him and had been “taken out of context.”

After a lengthy explanation of what exactly went on this weekend and the potential hacking theories that would explain how Rep. Weiner could have been hacked, Maddow introduced Rep. Weiner, who jokingly told her “I blame it all on you” before answering questions. Maddow kept the questions broad and allowed him time for explanation, and most of his core story didn’t change much from any of his other interviews: “Someone somehow got access to my Twitter account and tweeted a joke… when your name is ‘Weiner’ you get some of those sometimes.” He noted that “I do all of my own tweeting” and that the possibility of someone else having access to his account “doesn’t seem likely,” though he has hired a private investigation team. Of his behavior after the fact, he said he “quickly deleted it and move on with my life,” not expecting it to be a story and, to this day, still refuses to acknowledge it as important. “I don’t believe this is a big national emergency that requires international attention,” he joked.

Maddow then approached cautiously a question many throughout the day had been searching for an answer to with no clear result, preempting it with the fact that, thanks to his vague answer about the photo’s origin, “you realize that now everybody thinks the photo is you… where there’s smoke there’s fire.” Having apparently watched Lawrence O’Donnell an hour before, Rep. Weiner replied, “I have to say, I wish!” before saying that “the photo doesn’t look familiar to me.” Yet he still refused to say definitively whether it is him, but this time explained his rationale slightly more: “stuff gets manipulated… maybe it started out being a photograph of mine,” he allowed, that “was taken out of context.”

Rep. Weiner concluded that he would indeed return to Twitter and promised, “anything to unravel this important mystery, I will do.” As this controversy enters its fifth day, one can only hope new details will rise to clarify what exactly happened here soon.