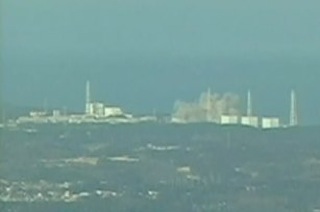 Contrary to preliminary reports, it appears that the Fukushima, Japan’s Dai-ichi plant, may be experiencing a reactor meltdown. The plant suffered a huge explosion hours ago after operators lost control of its chain reactions. This according to a report by Stratfor, which notes that while its core is still reported to be intact, this could cause much more significant long-term damage than expected.

The reports are partially based on the fact that smoke coming out of the explosion is now being described as “white smoke,” indicating, rather than a conventional fire, that the concrete surrounding the reactor is melting. The piece explains pretty thoroughly what the difference is between a reactor meltdown and a core meltdown (the reactor can start melting before the heat reaches the core at a sufficiently high temperature to feed the chain reactions):

A meltdown does not necessarily mean a nuclear disaster. As long as the reactor core, which is specifically designed to contain high levels of heat, pressure and radiation, remains intact, the melted fuel can be dealt with. If the core breaches but the containment facility built around the core remains intact, the melted fuel can still be dealt with — typically entombed within specialized concrete — but the cost and difficulty of such containment increases exponentially.

It also asks a key question: whether the floor of the reactor chamber has been broken through in the explosion. If so, Japanese authorities will have to contend with radioactive materials seeping into the ground and turning the terrain into a Chernobyl-esque zone of alienation.

The reports aren’t uniform from all media wires, however. Meanwhile, The Voice of Russia is reporting that the explosion is unlikely to be harmful, and cited a senior Japanese official as saying no explosion occurred at all.

UPDATE: Fox News is also reporting that the protective wall around the reactor has cracked, though Japanese officials report the explosion is not of a radioactive nature.