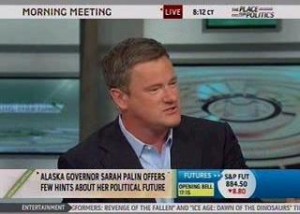 Fans of Keith Olbermann who were upset that he was suspended by MSNBC President Phil Griffin over campaign donations often pointed to similar donations made by Joe Scarborough as an example of unfair treatment. Well it appears that the treatment is now fair according to a Politico report that asserts that Scarborough has been suspended for two days for similar contributions.

MSNBC said Friday that it is suspending “Morning Joe” co-host Joe Scarborough for two days after he acknowledged giving eight previously unknown $500 contributions to friends and family members running for state and local offices during his tenure at the network, a violation of parent NBC’s ban on political contributions by employees without specific permission from the network president.

“I recognize that I have a responsibility to honor the guidelines and conditions of my employment, and I regret that I failed to do so in this matter,” Scarborough said in a statement. “I apologize to MSNBC and to anyone who has been negatively affected by my actions,” said, adding that after he was made aware of some of the contributions, he called MSNBC president Phil Griffin “and agreed with Phil’s immediate demand of a two-day suspension without pay.”

The suspension appears to be a direct result of reporting efforts by Politico, who had sought comment from MSNBC after
Politico had found “evidence that Scarborough gave at least five separate previously unknown $500 contributions while serving as an MNBC host. Scarborough last tweet before this news broke? “Keep Calm and Carry On: 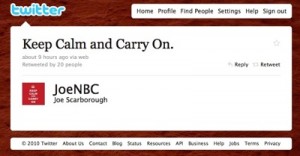 This situation appears to be quite a bit different from the Olbermann suspension since Scarborough and Griffin appeared to be on the same page with this disciplinary action, whereas the Griffin and Olbermann dispute was reported to be much more inimical. Joint statements released by MSNBC from both Mr. Griffin and Mr. Scarborough follow:

This morning Joe Scarborough informed me that he made eight contributions of $500 each to local candidates in Florida between 2004-08. In my conversation with Joe two weeks ago, he did not recall these contributions. Since he did not seek or receive prior approval or these contributions, Joe understands that I will be suspending him
for violating our policy. He will be immediately suspended for two days without pay and will return to the air on Wednesday, November 24th. As Joe recognizes, it is critical that we enforce our standards and policies.

It was recently brought to my attention that I made political contributions over the past several years that are not consistent with MSNBC’s guidelines. These contributions were to close personal friends and family members and were limited to local races.

Despite the fact that these races were local and not relevant to my work at MSNBC, I have been told they violated MSNBC guidelines.

I recognize that I have a responsibility to honor the guidelines and conditions of my employment, and I regret that I failed to do so in this matter. I apologize to MSNBC and to anyone who has been negatively affected by my actions.

I gave a number of $500 contributions to my brother and three longtime family friends. These contributions were nothing more than simple acts of friendship. I gained nothing personally, politically, or professionally from these donations.

To be blunt, I had no interest in their campaigns other than being kind to longtime friends.

Because the contributions involved local, non-competitive races–and were given for personal rather than political reasons–I mistakenly believed I did not need approval from MSNBC. I also apologize for that oversight.

After learning of this situation, I called Phil Griffin and agreed with Phil’s immediate demand of a two-day suspension without pay.

I am proud to work for the NBC News family. There is nothing more important than maintaining the integrity of its highly respected brand.

I apologize to Phil Griffin, Steve Capus, and my colleagues. This will not happen again.