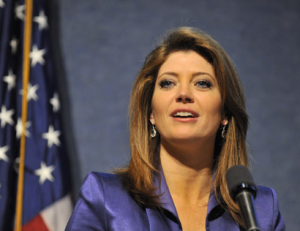 O’Donnell’s been with NBC since 1999, and before that reported for Roll Call, the Capitol Hill newspaper. In her role at MSNBC, O’Donnell’s reported on politics, served as a contributing correspondent for NBC’s top-rated TODAY, and anchored Weekend TODAY. She’s also been a regular on The Chris Matthews Show, the Sunday public affairs program.

In a statement announcing the hire, CBS News says Chip Reid, the current CBS chief White House correspondent, will become a national correspondent based in Washington, ‘with greater editorial range,’ CBS said.” O’Donnell will also become the principal substitute anchor of Face the Nation. In the statement from CBS, O’Donnell says “this is a once in a lifetime opportunity. I’m thrilled to cover the White House for CBS News. It is an honor and a privilege to join the great journalists at this legendary network.”

O’Donnell will also become the principal substitute anchor for FACE THE NATION, the growing Sunday morning public affairs broadcast anchored by CBS News’ Chief Washington Correspondent Bob Schieffer, and will report for all CBS News broadcasts, including occasionally for 60 MINUTES.

“It’s very exciting for all of us at CBS News to have Norah on our team,” said Fager. “She’s an accomplished reporter with extensive experience and she will be terrific as our Chief White House Correspondent.”

“Norah’s experience on Washington’s top beats—at the White House, on Capitol Hill, and at the Pentagon—will make her a great addition to our growing Washington bureau,” said Rhodes. “At the White House, on the campaign trail with the President, at the Conventions and into Election Night, we will be even more competitive in our reporting with Norah on board.”

“This is a once in a lifetime opportunity,” said O’Donnell. “I’m thrilled to cover the White House for CBS News. It is an honor and a privilege to join the great journalists at this legendary network.”

O’Donnell has been the Chief Washington Correspondent for MSNBC and a contributing correspondent for “TODAY” and “Weekend TODAY.” She also appears regularly on “The Chris Matthews Show” and has co-anchored the 9:00 AM hour of “TODAY.”

O’Donnell provided in-depth coverage of the 2008 presidential election, during which she anchored throughout the primaries and reported on the exit polls. She was one of the main anchors for MSNBC’s primetime coverage of both the Democratic and Republican conventions, and moderated a panel of MSNBC’s chief political analysts. She won an Emmy as part of NBC News’ election night coverage.

O’Donnell joined NBC News in 1999. Prior to that, she was a staff reporter for the Capitol Hill newspaper, Roll Call, and worked as a contributor and analyst for MSNBC.

During her 12-year tenure at NBC, O’Donnell’s assignments have taken her around the country and the globe. They include coverage of the 2004 presidential campaign of President George W. Bush, as well as the 2000 presidential campaigns of John McCain and George W. Bush. She provided analysis of the debates, the Republican and Democratic conventions, Election Night, as well as the 2000 Florida recount.

For her “Dateline NBC” story, “D.C. In Crisis,” which aired on September 11, 2001, O’Donnell was honored with the prestigious Sigma Delta Chi Award for Breaking News Coverage. In the months following the attacks, she traveled extensively with then-Secretary of Defense Donald Rumsfeld, reporting on the war in Afghanistan and the war on terrorism.