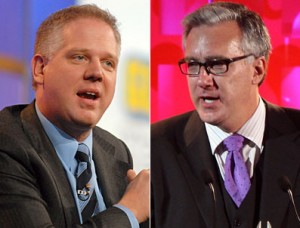 New data from Marketing Evaluations Inc. shows that, while both men will still ultimately enjoy their respective rabid loyal base of fans, many more people hold a negative view of Keith Olbermann and Glenn Beck than view them favorably. And, naturally, that would pose a problem where networks are concerned.

First, the firm determines whether their respondents are familiar with a given media personality (or brand or product), then asks whether they have a positive or negative view of said personality. These responses are called “Q scores.”

For Olbermann, his positive Q has remained a consistent “10,” meaning 10 percent of those surveyed hold a favorable view of the liberal pundit. His negative Q, however, jumped 10 points last winter (42) from where it was last summer (32). Keep in mind that the winter score was compiled right abound the time Olbermann abruptly announced he was leaving MSNBC.

Writing for Forbes, Jeff Bercovici puts these numbers in context:

What’s perfectly clear is that Olbermann is less liked, and more disliked, than the typical TV newsman. The category average for TV news personalities is a positive Q of 14 and a negative Q of 29 […]

Beck, meanwhile, enjoys a positive Q of 17, a number that’s well above the average in the industry. That said, his negative Q score is also above average at a whopping 48. He is loved, yes, and also despised. Now, could Beck and Olbermann’s high negative Q scores have something to do with their respective networks willingness to part with each pundit? Perhaps. For networks striving to build an audience that will stick with an evening lineup rather than a single show, hosts that stick out like sore thumbs with audiences pose an unwlecome challenge. And if both Olbermann and Beck inspire many, many more bad feelings than swooning fandom, it falls on networks to deal with it.

In any case, Beck is busily creating his own online show and focusing on expanding Mercury Radio Arts’ projects and Olbermann is set to take Countdown to Al Gore’s CurrentTV. Meaning: Each man will be able to cater to their respective fans while, perhaps, avoiding (or, again, capitalizing off of) their many (many) haters.