Report: Sean Spicer Wanted to Joke About SNL Parody, But Trump Forbade It 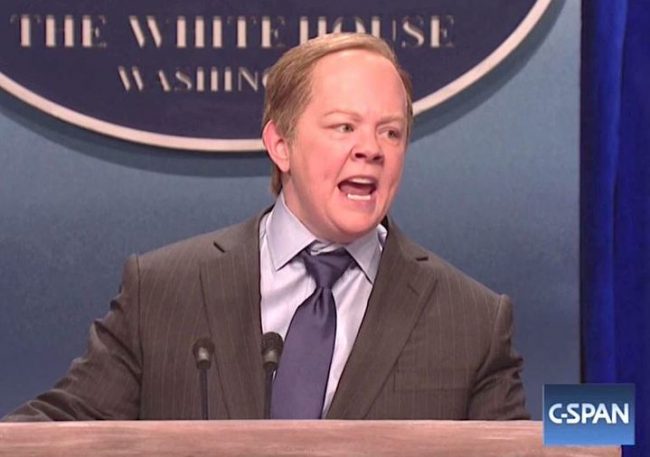 According to a Friday Politico report, White House press secretary Sean Spicer wanted to embrace and laugh off the Saturday Night Live parody of him, but President Donald Trump forbade it.

“Perhaps the job Trump has micromanaged the most is that of press secretary Sean Spicer, whose performance as the public face of the White House hasn’t always pleased the image-conscious president,” Politico writes. (Famously, it was reported early in his presidency that Trump was displeased with Spicer’s choices of suit.)

“The president, who is obsessive about looks and appearance, even was unhappy with a Saturday Night Live parody of a Spicer briefing, partly because the combative press secretary was depicted by a female comedian, Melissa McCarthy,” they continued. “After it aired, Spicer had proposed cracking a joke about the send-up during his next briefing, or even firing a squirt gun, as McCarthy had done in the sketch. Trump vetoed the idea…”

The report comes the same week that Politico reported that White House counselor Kellyanne Conway bailed on a meeting with House Republican communications staffers after one of them jokingly asked her about the sketch.