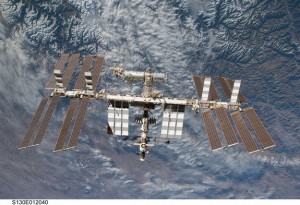 This isn’t the sort of news one sees very often. Nasa has recently confirmed that “space junk” is threatening the International Space Station that may lead the three astronauts on board to take shelter in the capsule. Nasa claims that the dangerous item is but a six-inch part of a Chinese satellite that had been intentionally destroyed but is currently traveling at the speed of five miles per second. Woof.

The threatening space debris will zoom within 2.7 miles (4.5 kilometers) when it makes its closest approach at about 4:21 p.m. EDT (2021 GMT) today, NASA spokesman Josh Byerly told SPACE.com from the agency’s Johnson Space Center in Houston.

The station’s three-person crew includes NASA astronaut Cady Colman, Italian astronaut Paolo Nespoli and Russian cosmonaut Dmitry Kondratyev, who is commanding the mission. The astronauts and cosmonaut will close hatches between modules of the station’s U.S. segment, and take shelter in their Soyuz TMA-21 spacecraft, which can double as a lifeboat in case the debris actually strikes the space station and forces the crew to flee.

NASA is keeping a close eye on the space debris to make sure it passes by the space station without incident.

The space debris is a piece of China’s defunct weather satellite Fengyun-1C, which was destroyed during a Chinese anti-satellite test in 2007 that created a vast cloud of orbital debris, NASA officials said. [Worst Space Debris Moments of All Time]