Reporter Learns Not to Ask Asian-American Comedians About Chopsticks

Reporter Learns Not to Ask Asian-American Comedians About Chopsticks 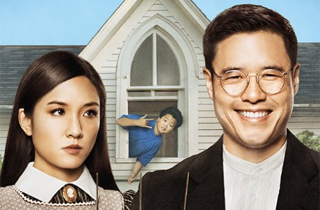 In a few days, the highly-anticipated premiere of the new ABC series Fresh Off The Boat will answer the question: is America ready for a sitcom about the Asian-American experience, one that goes beyond the stereotypes of Asians being chopstick math people?

Unfortunately, an unknown reporter at the series preview didn’t get the memo, and asked the entire cast — to their faces! — this question during a Q&A panel at the ABC TCAs.

Actual quote, via US Magazine: “I love the Asian culture. And I was just talking about the chopsticks, and I just love all that. Will I get to see that, or will it be more Americanized?”

While the crowd laughed uncomfortably, the creative team just went for it:

Producer Eddie Huang added, “Yeah, we got a lot of chopsticks,” with writer and executive producer Nahnatchka Khan adding, “Wait till Episode 5. It’s all about chopsticks.”

Not backing down, the reporter then continued the line of questioning, asking, “Will there be more about the culture or is it more about the becoming more American?”

Huang, who became famous as a celebrity chef who didn’t go the celebrity chef route, wrote the memoir that the series is based on. Along with Wu, the series stars The Interview‘s Randall Park, who revealed that he, too, shared his colleagues’ passion for chopsticks:

“But ‘Chopsticks’ was too controversial, so we changed it,” Wu said.

“There was also rights issues with the piano song,” Huang added.

Fresh Off The Boat premieres on February 4th at 10 PM EST on ABC.