Reporter On Obama’s ‘Amateurish’ Press Corps: ‘When They’re Near Him, They Lose Their Minds’
video

Reporter On Obama’s ‘Amateurish’ Press Corps: ‘When They’re Near Him, They Lose Their Minds’ 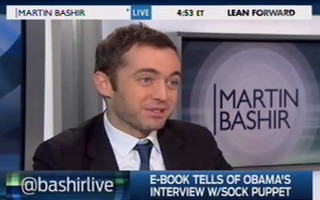 Rolling Stone reporter Michael Hastings, author of the BuzzFeed special book on the 2012 campaign Panic 2012, joined Martin Bashir on Thursday where he revealed that journalists who covered President Barack Obama during the campaign were sometimes so overcome by his presence that they would “lose their minds” and behave in “juvenile” and “amateurish” ways. Among other anecdotes, Hastings admitted that he once had the opportunity to ask the president hard questions, but was so similarly moved by his presence that he only asked “soft” questions.

RELATED: Rolling Stone Reporter: Obama Bombed In First Debate Because He Was Dealing With Benghazi

Hastings revealed one anecdote in the book which he described to Bashir in which an unnamed Wall Street Journal reporter attempted to interview the president through the medium of a sock puppet.

“It was a puppet that looked like Obama,” Hastings said, though he refused to imitate the “squeaky voice” that he said this reporter used in that moment. Hastings said that the president found that particular episode to be “very strange.”

“That’s the presence of Obama, even on the press corps – even on the people who follow him every day – when they’re near him, they lose their minds sometimes,” Hastings said. “They start behaving in ways that are juvenile, and amateurish, and they swoon.”

“Of course, you don’t?” Bashir asked.

“Oh, I do,” Hastings replied. Hastings said that he first met then-Sen. Obama in Iraq in 2006 and, when faced with the opportunity to ask Obama tough questions, was unable to pitch him anything but “soft” questions.