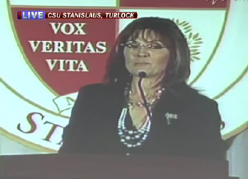 Apparently this is officially the week the world discovers reporters have opinions, too. Hot on the heels of Dave Weigel‘s resignation from WaPo over some leaked emails in which he expressed his dislike over certain aspects of the conservative movement comes this video of reporters getting caught on a hot mic making fun of Sarah Palin.

Palin’s speech at California State University at Stanislaus yesterday was carried live on FOX40.com and after it was finished some reporters, apparently unaware the live feed was still going, could be heard making less than flattering remarks about the substance of Palin’s address:

“How am I going to write about this-there’s nothing there-answer well there’s your story.”

It’s unclear who the reporters were exactly — one blogger has suggested it may have been technicians or cameramen, though the nature of the comments suggests they were being made by people there to cover the event. The uproar in the blogosphere was enough, however, to compel Fox40.com to later release this statement explaining the mishap:

FOX40 News was the only station streaming a live signal from CSU Stanislaus during Sarah Palin’s presentation…While our cameras pointed at the CSU screen, showing the CSU camera, several reporters for other stations walked in front of our camera. Also, again, since CSU did not offer us a direct audio feed, we had to put a microphone in front of their sound system. Other reporters were overheard on that, despite several warnings that we had a hot mic, and several thousand people watching.

Not surprisingly, no one has come forward yet to claim responsibility for the remarks, which is too bad in so far as I’d be curious to compare the reporters “hot mic” impressions to the reports that were officially approved for public consumption. Watch below.