Reporters Fire Back on Twitter After Prosecutor Lays Blame on Media 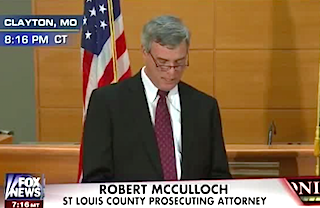 Before St. Louis Prosecutor Bob McCulloch announced that there would be no indictment for Ferguson Police Officer Darren Wilson in the shooting death of unarmed teenager Michael Brown, he spent a few minutes railing against the media for its role in the process leading up to Monday night’s announcement.

“The most significant challenge encountered in this investigation has been the 24-hour news cycle and its insatiable appetite for something, for anything to talk about,” he said, “following closely behind with the non-stop rumors on social media.”

Here’s how reporters responded on Twitter as he spoke:

That opening statement sounds like, "None of this would be a problem except the Internet."

The tone needed here would be hard for anyone to get just right, but McCulloch isn’t even in the ballpark

McCulloch: it's the media and twitter's fault

Twitter is indicted for blowing it, prosecutor seems to say. GET TO IT.

It's always the weasels who blame the media. #Fergsuon

Twitter gave this story life, shaped the narrative. Even if you disagree, you must know that throwing shade on social media is a bad idea.

Social media and the "24 hours news cycle" get blamed for everything.

McCulloch says "most significant challenge" was the 24-hour news cycle & "insatiable appetite for something, for anything, to talk about."

I guess Bob McCulloch's opening statement is, "If you think I haven't done my job correctly, that's Twitter's fault."

So far the social media and the news-cycle have taken the most criticism in this statement. Okay then.

Things not indicted: The person who killed a kid with his hands up

My jaw's on the floor. This is really something.

to be fair, twitter IS a den of misery.

Dude, cable news and some of Twitter suck sometimes. They didn't put the gun in Wilson's hand.

Any chance this speech will end with “(guest opinion blog)”?

This prosecutor is really giving it to social media! Good to know he has priorities in order.

This guy's anger at the media digging into the story makes me very proud of my colleagues.

Watch video of McCulloch’s statement below, via Fox News: