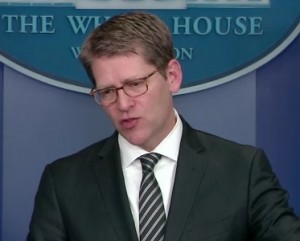 RELATED: Pelosi Backs Up Harry Reid’s Allegations Against Romney: ‘Somebody Told Him. It Is A Fact’

“The President talks a lot about changing the tone in this town, why hasn’t he picked up the phone and ask Harry Reid to stop making a charge like that,” asked Henry, attempting to cajole a response out of Carney that would be politically consistent — though at odds with his party’s Congressional leadership.

Carney started to respond that he felt it would not be the White House’s place to tell Sen. Reid what he should and should not say.

Henry rephrased the question, saying that he would like an opinion from Carney about how the President feels about the tone, if not the substance, of Reid’s allegation. Carney replied that he thought the President agrees that it is important to talk about reforming the tax code and why the outsourcing of jobs is a critical election year issue. He did not, however, directly answer Henry’s question.

At this point, Henry became audibly frustrated with Carney’s hedging. He asked flatly, “does the White House believe that allegation?”

Carney replied that only Harry Reid knows what is in the mind of Harry Reid. However, the White House Press Secretary did say that he thought the issue of why Romney has not released more than the planned two years of tax returns “is a fair point to make.”

Finally, when asked by another reporter if Reid’s allegations were “below the belt,” Carney replied that “the President has not expressed an opinion to me on this.”

Why the White House has not disavowed the way in which Reid is making these charges — not the allegations themselves — eludes me. The tone of Reid’s single-sourced indictment against Romney lacks credibility, turns Romney from a secretive to a sympathetic character and paints all future attacks on Romney’s taxable wealth with a veneer of doubt.

There is little downside for the White House in keeping this story alive, unless they are directly tied to the allegations (presuming they are never proven or disproven definitely). By not disavowing it, the Obama White House could share in the culpability for spreading what will eventually be dubbed by consensus merely a rumor.

That could come to haunt the Obama campaign as the general election campaign gears up in the fall.

Watch the press briefing below via Fox News Channel: