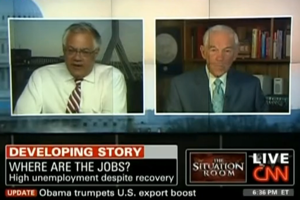 Democratic Rep. Barney Frank and Republican Rep. Ron Paul recently set party differences aside to start working on a bill to bring American troops home, and made a joint appearance on CNN’s The Situation Room to explain their strategy. According to Frank and Paul, rather than retreating troops in the Middle East, they are focusing on a diminished presence in Germany and Japan, among other states.

Rep. Paul certainly isn’t averse to working with the other party– the last time we saw him talking about his legislative work, he had teamed up with Democratic Rep. Alan Grayson to draft a bill t0 audit the Federal Reserve. “I’m always looking for an opportunity to bring progressive Democrats together with some conservative libertarian types,” he told Wolf Blitzer, and found an ally in Rep. Frank.

Rep. Frank explained that he and Paul were united by a similar idea: a rejection of “the notion that we must be the superpower and we have to intervene everywhere that both Ron Paul and I think makes no sense.” He clarified that they were discussing exclusively troops placed strategically based on NATO– “I don’t argue in extremes”– Frank told Blitzer, and while both Congressmen oppose the war in Iraq, they are first focusing on troops in Japan and Western Europe.

Paul also addresses his last week of RNC Chairman Michael Steele‘s remarks against the war in Afghanistan. “I went to his defense,” he explained, “because I thought he blurted out the truth, and I was very pleased with him.” Paul also hinted that “there’s a lot of people that agree with what he said and there’s a lot of Republicans who agree,” too.

Video from yesterday’s Situation Room below: