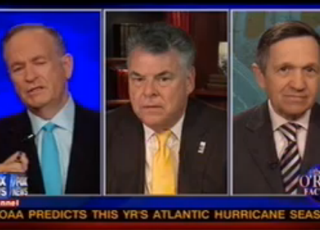 The news that the doctor that helped the CIA find Osama Bin Laden has been sentenced to decades in prison for helping America out by Pakistani authorities had Bill O’Reilly incensed today, his “Talking Points Memo” dedicated to making the point that if America doesn’t help its informants overseas, the country won’t be able count on people helping us in the War on Terror. To argue that point, Reps. Peter King and Dennis Kucinich assessed the Obama administration’s response.

Rep. King’s main argument is was that the CIA had been far too loose-lipped about his identity, noting that “earlier this year, in January, Leon Panetta went on 60 Minutes and told how the doctor was a CIA asset and working for us.” O’Reilly replied that the Obama administration claimed the “Pakistanis leaked all the information, not the United States government.” He noted that the trial the doctor got was essentially a joke, without a lawyer or adequate legal safeguards. O’Reilly then turned to Kucinich, asking that if “the Democrats are supposed to be the party of compassion,” surely they would help the doctor.

Rep. Kucinich agreed with Rep. King on the secrecy concerns, though he claimed, “I’ve never heard of the CIA publicly discussing an operative.” Kucinich argued that the Obama administration was not caught flat-footed however– that drones were set up all over the Middle East and strikes were possible, to defend those that need it. Kucinich predicted the doctor was still considered a “pawn.” He added that he did not want to “second-guess” the Obama administration, though O’Reilly once again argued that “we look weak in the world,” and “we’re not going to have anybody help us” if we don’t help them when charged with treason.