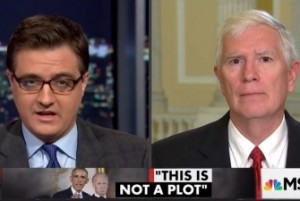 President Obama‘s just-announced executive actions on gun regulation have had the predictable effect of boosting the sale of popular gun talking points, one of which got a little banged up Wednesday night by All In with Chris Hayes host Chris Hayes. At the conclusion of an interview with Rep. Mo Brooks (R-AL), Hayes decided to put the tandem “gun-free zones” and “good guy with a gun” talking points to the test by asking Brooks if he would support allowing law-abiding gun owners to carry firearms in the U.S. Capitol complex.

Brooks first tried to parry with a “property rights” argument, but then admitted that he would not support it because:

Chris Hayes: My understanding is you have a concealed carry permit in Alabama. Should citizens and members of Congress be allowed to carry inside the US Capitol where you’re standing now?

Rep. Mo Brooks: I’m also one who believes in property rights, and the property owners has a say in when a person can or cannot bring a gun onto their own property, so that’s a debate we’re going to have to resolve…

Hayes: Right, but you control that property, would you support…

Hayes: Oh, okay, so you oppose it.

Now, what possible risk could more law-abiding good guys with guns possibly pose? More to the point, when will the media start asking other Republican candidates if they plan to infringe on law-abiding gun owners’ rights by confiscating their guns before they enter the White House grounds? Without that foolish policy of disarming citizens, Olympus might not Have Fallen, and the White House mightn’t have gone Down in the first place.

I’m betting most of them, like Brooks, will choose gun free for me, but not for thee. Prove me wrong, media.