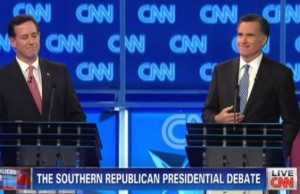 Moderator John King started out by noting that former Speaker Newt Gingrich posted his 2010 tax return during the debate, and Rep. Ron Paul joked that he was too embarrassed by his lowly income to release his.

“Governor romney, when will we see yours?” King asked.

Romney launched into a long, hemming and hawing response that ended up where Romney already was: releasing his tax returns in April. “When my taxes are complete for this year,” Romney replied. And i know if i’m the nominee, the President’s going to want to insist that I show what my income was this last year and so forth. when they’re completed this year in April, I’ll release my returns in April, and probably for other years as well.”

Although Romney blamed his reluctance on President Obama, King pointed out that the question had been raised by ” some of your rivals up here. Governor Perry made that point as well before he left the race. Why not show the people of South Carolina, before this election, see last year’s return?”

Romney’s answer was reminiscent of his “I’m running for office, for Pete’s sake.”

“Because I want to make sure that I beat President Obama,” Romney replied, adding “Every time we release things drip by drip, the Democrats go out with another array of abeing attacks. I’ll put these out at one time so we have one discussion of all of this. I obviously pay all full taxes. I’m honest in my dealings with people. People understand that. My taxes are carefully managed. I pay a lot of taxes. I’ve been very successful.” ”

At this point, some jeering could be heard, as Romney concluded, “When I have our taxes ready for this year, I’ll release them.”

After moving on to Rick Santorum (whose taxes are on his computer at home), King came back to Romney to ask him if he would follow his father’s example, and release 12 years worth of returns.

“Maybe.” Romney said, with an uncomfortable laugh. “I don’t know how many years I’ll release. I’ll take a look at what our documents are.”

His response was met with loud jeers from the crowd. Romney is wrong on this. His old tax returns will continue to be a death of a thousand cuts, and he ought to take Chris Christie’s advice, and put them out now.