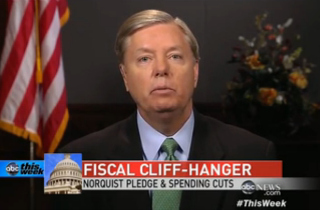 Appearing on ABC’s This Week on Sunday morning, Sen. Lindsey Graham (R-SC) joined the chorus of Republican lawmakers who say they are willing to break anti-tax activist Grover Norquist‘s long-standing pledge to not increase tax revenues if it means achieving a deal that included entitlement reform.

“I’m willing to generate revenue,” the Republican senator told host George Stephanopoulos. “It’s fair to ask my party to put revenue on the table. We’re below historic averages. I will not raise tax rates to do it. I will cap deductions. If you cap deductions around the $30,000, $40,000 range, you can raise $1 trillion in revenue, and the people who lose their deductions are the upper-income Americans. But to do this, I just don’t want to promise the spending cuts. I want entitlement reforms. Republicans always put revenue on the table. Democrats always promise to cut spending. Well, we never cut spending. What I’m looking for is more revenue for entitlement reform before the end of the year.”

He added that he loves being a lawmaker and wants to make sure the fiscal cliff is avoided: “When you’re $16 trillion in debt, the only pledge we should be making to each other is to avoid becoming Greece, and Republicans — Republicans should put revenue on the table. We’re this far in debt. We don’t generate enough revenue. Capping deductions will help generate revenue. Raising tax rates will hurt job creation.”

“I agree with Grover,” he continued, “we shouldn’t raise rates, but I think Grover is wrong when it comes to we can’t cap deductions and buy down debt. What do you do with the money? I want to buy down debt and cut rates to create jobs, but I will violate the pledge, long story short, for the good of the country, only if Democrats will do entitlement reform.”