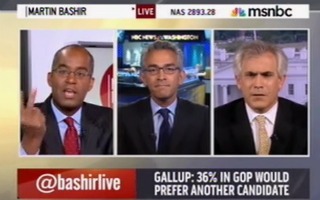 “Both presidents have increased the debt,” said Wolffe. However, he went on to say that it was Romney’s proposals that would “blow a massive hole in the debt.” Wolffe criticized Romney for not releasing any plan to be scored, and said that what the press knows about his economic plans is inadequate to solve the debt crisis. “he may have identified a problem, but his solutions are no better than anything we’ve seen – in fact they’re worse,” said Wolffe.

Christie said it was not fair. He went on to outline how spending as a proportion of gross domestic product had skyrocketed since Obama took office.

Bashir interrupted that he was unclear how Romney could reduce the deficit and increase spending on things like the military. “And cut taxes,” Wolffe chimed in. “How does he close the deficit by cutting taxes across the board and increasing spending? Tell me?”

Christie’s assertion was met with a chorus of “voodoo” from his fellow panelists. Crosstalk ensued.

Corn interjected that the 1980 tax cuts were later met with tax increases because they produced deficits. “It’s simply not truth that if you cut taxes you get economic growth. Look at what happened during the Bush years,” said Corn.

Wolffe said that the Bush administration’s jobs creation record was even worse than that of President Jimmy Carter. “You cannot say that cutting taxes repairs the hole in the budget – it doesn’t lead to increased tax revenue – unless you believe in the very voodoo economics that the first President Bush thought was crazy,” said Wolffe.

“Voodoo economics? That’s the best you can come up with,” Christie replied. More crosstalk ensued.

Christie went on to cite jobs creation records and revenue records from the 1980s and 2000s that he contends were the result of broad tax cuts.