Rest Easy: Glenn Beck Doesn’t Think Nuclear War Is Imminent. But If It IS… 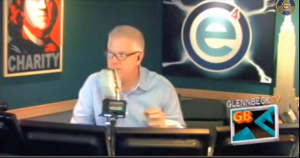 Glenn Beck took a little time to address something on many people’s minds: The end of the world! Brought upon, specifically, by nuclear war. Will it happen? Won’t it? Should we start stockpiling baby wipes and saltines right about now?

You might remember that, last night, MSNBC host Lawrence O’Donnell issued a response to what he perceived as Fox News’ insistence on “hyping” the situation with Japan’s Fukushima Daiichi nuclear power plant.

He attempted to use a quote from Beck’s radio show (Beck being, of course, a Fox News personality) to demonstrate his point. Our own Frances Martel describes the specific clip to which O’Donnell referred:

Beck states in the clip that the point of the book of Revelations is so that “we know what it looks like” when the world will end, though Beck also repeatedly states whether or not the world is ending is a question beyond his realm of expertise. But since Beck brought up the Bible, O’Donnell felt compelled to point something out about Revelations: it has no place in the current discussion of what to do about Japan. Revelations, he explains, is a “work of fiction” that describes the acts of a god whose moral disposition is “worse than Hitler.”

Beck shot back on his radio show, saying that he “didn’t know” when the word would end, but felt that O’Donnell was perhaps giving a tip of the hat to Lucifer. Furthermore, Beck, asks, why would he advise people to invest in gold if he thought the world was about to crumble under the threat of nuclear war? Who would need money?

Besides: It’s not like nuclear war wouldn’t have survivors. Hey, you can never be too prepared.