Results Are In And Many Agree: Fox News Offered More Balanced Election Coverage Than MSNBC 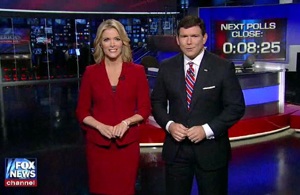 If you believe that the cable news landscape is symptomatic of our two-party political system, then you also probably, and predictably, saw a different tone in last nights election results. Fox News presented its coverage with a patina of celebration, while MSNBC’s took a more gloom and doom approach. But there was one important distinction between the two outlets: Fox News offered a far more balanced set of analysts for the election coverage than did MSNBC.

Almost all of the results from yesterday’s midterm elections are in, and there is little question that the GOP has good reason to celebrate the returns. The U.S. House of Representatives has returned to Republican leadership and though it’s premature to definitively say as much, many have seen this as a referendum on the Obama administration.

Fox News’ key decision in their approach to covering the election last night was putting their heaviest hitters on the bench, choosing their up-and-comers Megyn Kelly and Bret Baier to serve as hosts of their coverage, an overt effort to have their news anchors cover the election results instead of their opinion hosts (as opposed to MSNBC.)

But not everyone saw it that way. Writing for the Washington Post, Dana Milbank was rather harsh in his critique, writing:

As Fox’s Megyn Kelly announced that one Democratic senator, expected to lose big, was in a race “too close to call,” she commented: “That’s, uh, an interesting update.” When Rep. Barney Frank (D-Mass), said by Fox commentators to be endangered, cruised to an easy win, Kelly commented: “Alas.”

The victory party would have to focus on the 60-seat gain Fox projected for Republicans in the House – an enormous win, though not at the upper end of the forecasts. Fox commentator Karl Rove, pleading for “perspective,” said it still qualified as a “blowout evening.” To be fair and balanced, Fox brought in a nominal Democrat, pollster Doug Schoen. “This is a complete repudiation of the Democratic Party,” he proclaimed.

Milbank’s understandable critique of Fox News’ tone is diminished by his own lack of fairness in his reporting; it seems like he’d have the reader believe that Democratic pollster Doug Schoen was the lone left-of-center voice on the channel. The truth is, FNC offered a panoply of left-of-center voices, including Bob Beckel, Juan Williams, Joe Trippi , Geraldine Ferraro and Kirsten Powers among a handful of others. And, to be fair, there is significant criticism on the left that these pundits might not be the strongest voice for the progressive movement, but they are on the air, nonetheless.

But don’t just take our word for it, read what other media critics had to say. Writing for Time‘s Tuned In blog James Poniewozik seemed to agree that Fox News was fairer than the lot:

To be fair, NBC did join coverage earlier, after an all-new Biggest Loser.) Fox News, for all its image as the Republican-friendly network, actually seemed to have the most reserved coverage in tone of the three big cablers, going with a more reserved set and less flashy graphics (granted, by cable news standards) than its competitors. A whiteboard was even employed.

Credit where due, Fox also had a more, well, balanced panel much of the night than its competitor MSNBC. Holding forth from left of center for Fox were the recently-high-profile Juan Williams and Democratic political guru Joe Trippi. MSNBC’s main lineup, on the other hand, was basically its center-to-left lineup of nightly hosts: Chris Matthews, Keith Olbermann, Rachel Maddow and Lawrence O’Donnell.

Politico also drew a similar distinction between the coverage and analysis provided by MSNBC and Fox News:

Although Fox News took the most criticism during this campaign season for its alleged bias, it was MSNBC — whose new “Lean Forward” tagline inspired CNN’s promo — that wore its point of view most on its sleeve Tuesday night.

MSNBC’s election coverage was led by a panel comprised mostly of its opinionated prime-time hosts (Keith Olbermann, Chris Matthews, Rachel Maddow and Lawrence O’Donnell, along with frequent contributor Eugene Robinson), with nary a conservative voice in the mix. In contrast, Fox News’s was provided by two anchors from its straight-news dayside, Megyn Kelly and Bret Baier, along with a panel that included conservatives like Karl Rove as well as liberals like Juan Williams. Bill O’Reilly and Sean Hannity stopped by only briefly.

Missing from this conversation is CNN, who make very clear that they avoid the “opiniotainment” racket (and appear to suffer in ratings because of it.) Yes, CNN offered a very balanced slate of political analysts, but did so in the rather absurd visual of two long desks in studio, each packed with what seemed like a dozen pundits of many stripes. Was it a balanced approach? Yes, but someone at CNN needs to thin the herd of pundits, or just offer another studio solution to avoid future issues with the New York Fire Marsall regarding occupancy limits at the Time Warner center.

“Fair and Balanced” is a tag line for Fox News that often gets derided by its critics (and sometimes most deservedly.) But that does not mean that they don’t deserve credit when credit is due.