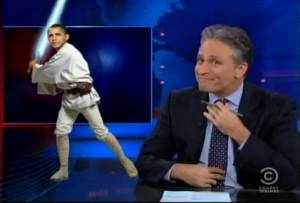 The Daily Show returned to the airwaves last night after a two week holiday break with little hard news nor media coverage having occurred in the last week to dissect. So host Jon Stewart turned to his not-so-wayback machine, and recapped President Obama‘s stunning string of legislative victories that came in the last week of the lame duck session. Stewart compared Obama to a young Jedi known as Luke Skywalker, hero of Star Wars, in a funny, clever and somewhat ham-fisted analogy.

Just like Luke defeated the Evil Empire and blew up the Deathstar, so too did Obama defy outrageous odds in getting elected as The New Hope. But the celebration quickly ended as the “Republic-an Empire” struck back, with a string of political victories that made the young Jedi knight (Obama) look weak and impotent. There’s even the frozen planet of Hoth with the cave Wampa monster (who like Sarah Palin, can see the planet Tatooine from her cave.)

The twisted analogy ends with Jabba the Hutt and his chosen bounty hunter Boba Fett getting defeated as lameduck Return of the Jedi. (The repeal of Don’t Ask Don’t Tell? Celebrated by dancing Ewoks on the planet Endor!)

Even if the metaphor is less than exact, it didn’t make the segment any less entertaining — who doesn’t enjoy an entertainer breaking with laughter a la Harvey Kormon? Watch the following segment from Comedy Central below:

(Editor’s note – thanks to Star Wars expert Nate Hall, age 7, who provided necessary expertise on this this post.)