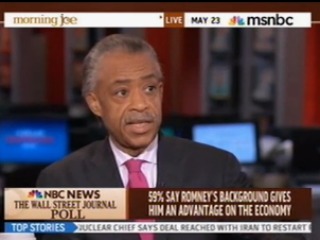 On Wednesday, the folks at Morning Joe collectively weighed in on how Mitt Romney‘s experience and record — both as a businessman at Bain and as the former Governor of Massachusetts — will impact his chances of landing the presidency. MSNBC’s Chuck Todd offered an explanation for why President Obama’s re-election campaign is “trying so hard” to disqualify Romney’s business background. Voters, he said, “initially believe the best in the businessman when it comes to certain things on economic issues, which is why they are trying to redefine his background on their terms.”

Panelist and MSNBC host Al Sharpton offered his take on the matter:

See, one of the things that I think that the Romney campaign is making is saying an attack on them is an attack on business, and that gives you the opportunity to go in and show the difference between him and business. And if you are such a great businessman, if your CEO background makes you qualified to do all of this in government, then why do you do it as Governor of Massachusetts when you were number 47 in job creation out of 50 states? So I think that, you know, it’s going to come down to a — since he put this out there, “I’m a businessman, I can do this.” Well, show us where you did it. What companies created jobs? Why didn’t you create jobs as Governor of Massachusetts? He’s had a one-way narrative. Now that everybody is firing back, it’s different. Rabbit hunting ain’t fun when the rabbit got the gun.

“What does that have to with blueberry pie?” asked Todd, referring, of course, to MSNBC’s most memorable promo ad. “Is that how they get the blueberry pie?”

Panelist Mike Barnicle then noted that, when campaigning, perception is often more important than reality, and this is true today for voters. “You’ve got the perpetual unemployment for a lot of people over the age of 50,” he explained. “You’ve got what happened with JP Morgan just recently. — I’m not saying it’s bad — And you’ve got what happened today in the papers. You know, did Morgan Stanley cook the books, you know, and tell insiders about Facebook? All of that is out there as perception. People are sitting and saying, you know, ‘I don’t want a big business guy. I don’t want a big business guy. They’re different.'”

Scarborough agreed, but added that

Have a look at their conversation, via MSNBC: