Rev. Al Sharpton The Lone Voice Of Reason In MSNBC Debate Panel That Lost All Perspective 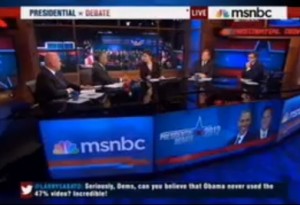 The entire current media landscape has proven itself to be ill-equipped to handle Wednesday night’s presidential debate, with the lone exception of MSNBC’s Rev. Al Sharpton. While every cable network tripped over themselves to declare Mitt Romney the winner, and even MSNBC’s panel made President Obama‘s poor stylistic and substantive performance The! Blaring! Headline!, it was Rev. Al who kept the focus where it belonged: on the egregious lies of Mitt Romney, pointing out that while he “gave a good testimony,” Romney “will be indicted for perjury, because he’s lying.”

To be clear, the MSNBC panel, which included anchor Rachel Maddow, Ed Schultz, Chris Hayes, Steve Schmidt, and remotes from Chris Matthews and Lawrence O’Donnell, spent a lot of time and specificity pointing out the lies of Mitt Romney, but the BIG EFFING STORY was President Obama’s failure to fight back effectively, and Mitt Romney’s resultant victory. Only Rev. Al focused like  laser on the stunning lies that the President and moderator Jim Lehrer let Romney get away with. He did it throughout the broadcast, but particularly well when he summed up the “verdict” that Romney was the clear winner by saying “I would suggest to the court that he made a good testimony, but he will be indicted for perjury, because he’s lying. When you take what he said tonight and compare it to his proposals, to what he said, to what he has represented, to the Ryan plan, it does not match what he said tonight. So how are we going to be impressed with someone that made a very passionate and a very articulate series of lies tonight?” 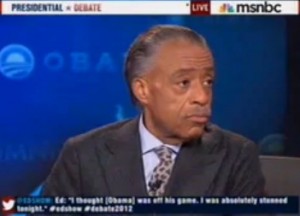 Rachel Maddow responded with the realpolitik assessment that Romney “didn’t make a case for his record, but he made a case for being president despite his record.”

“And every time someone said, when the President said, ‘you would do this,’ he would say ‘no, I wouldn’t.’ But we’ve got video that you would!” Rev. Al exclaimed. “Andwhen somebody brought up something popular, ‘yes, I would do that.’ But that’s against what you and your party has represented. So I’m not going to set up in the courtroom, if that’s what we’re using as the analogy and be swayed by a witness that I know that when you present the tape, he’s going to look like what he is.”

The discussion then quickly returned to the President’s failure to check Romney, with Rev. Al delivering the occasional priceless reaction shot:

Again, even the harsh assessment of President Obama’s tactical performance delivered by Chris Matthews was spot-on. Even if you grant Chris Hayes’ premise that the President’s lack of aggression may have been wise in the long term, the President was, inarguably, too slow to recognize that he was not in a fair fight, that moderator Jim Lehrer had abdicated his role. If the President wasn’t going to attack, he at least needed to block the shiv that Romney kept sticking in him.

And while it is possible to tell more than one story, which the MSNBC panel did by repeatedly highlighting Romney’s lies alongside their criticism of the President, you only get to have one headline, and their headline was not “Romney Gets Away With Incredible String Of Lies,” it was “President Obama Badly Beaten By String Of Romney Lies.” When Mike Tyson bit Evander Holyfield, the headline wasn’t “Holyfield Offers Lackluster Defense Of Ear.”

Romney’s lies don’t seem to matter to anyone in the media, who have relegated them to sidebar status, at best. This illustrates the problem with our political media landscape, the acceptance of post-truth politics, and while MSNBC’s progressive point of view helped them to call out those lies more effectively, it also led them to focus more on the practical consequences of this debate. Rev. Al is right, the truth should matter, and Rachel Maddow is right, it doesn’t matter as much as the prizefight does, but that’s the role of journalism: to make the truth matter.