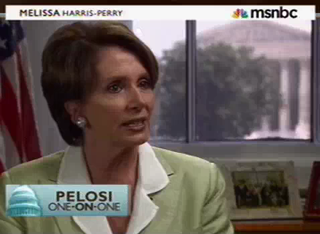 Rep. Nancy Pelosi blamed the lack of civility in politics this morning for the allegedly dwindling number of women in politics these days. In an interview with MSNBC host Melissa Harris-Perry, the House Minority Leader argued that women are having a hard time entering politics because of “the harshness” of the current political climate, suggesting that “the minute a woman gets tough in a debate,” the subsequent characterizations can deter her from continuing to participate.

RELATED: Rep. Nancy Pelosi To Ed Schultz: Today’s Ruling A Victory ‘For Health Care As A Right, Not A Privilege’

“There’s a certain respect of the person and the people who sent us here… that changed a little later in the ’90s,” Rep. Pelosi told Harris-Perry, explaining that she saw civility dwindle over time in Congress. She praised President George H.W. Bush for reversing his opinion on raising taxes, being thankful “he had the courage to do what he did” and the attacks on him were not as vicious as attacks grew to become.

She then theorized that a climate of hostility would keep women away from politics by virtue of them being born women:

The stridency, the harshness– they suppress, they suffocate the system with money, they suppress the vote and they poison the debate and that’s not a good formula for women because women need to have a civil conservation. The minute a woman gets tough in a debate, you know what they say about her.

There is nothing particularly incorrect about Rep. Pelosi pointing out that politics is one of the more difficult sports and it takes a thick skin to survive. She is also not incorrect in pointing out that it’s pretty easy for a woman to earn the “bitch” label just for agreeing or disagreeing with a stance a man opposes. It happens, as any woman who has ever had a political opinion can tell you. But the problem with Rep. Pelosi’s message here is that she posits the solution to the problem is to dumb down the game or make politics more “civil”– that the problem is not that some women are hesitant to take the rhetorical punches, but that women as a whole are somehow born unable to withstand the difficulties of being a public official. If politics were Jeopardy! and only men kept winning, Rep. Pelosi would argue that the solution would be to make the questions easier, and not to change the way guests are recruited or educational emphases in classrooms.

To argue that women are inherently unable to withstand the heat and thus politics as a whole has to change teeters dangerously close to a sexist argument. Beyond that, it validates the attacks on women for having political opinions that Rep. Pelosi rails against to begin with. To say that people should behave more civilly lest women scurry back into their shells is to say that those who hurl sexist invective at women are right to think they are too weak for the job. It encourage women to continue scurrying away instead of standing up, fighting back and proving those who dismiss them wrong.

Rep. Pelosi has never backed down from a political position because of what “people” would say about her for being a woman. That she excuses those who do benefits no one, especially women who would otherwise be involved in the political process but now feel justified in sitting it out.