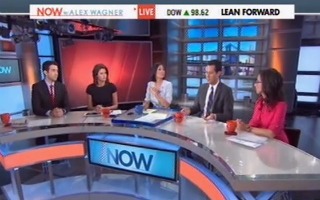 Ari Melber, columnist for The Nation magazine, took a swipe at the New York Times report in the Home & Garden section on Mitt Romney’s San Diego home which he said was a thinly veiled attack on the Republican presidential nominee’s wealth. Melber sparred with New York Times reporter Jodi Kantor on the validity of the substance of the article as well as the section where it was published.

In the article, “The Candidate Next Door,” reporter Michael Barbaro interviews a number of Romney’s neighbors and details the neighborhood. Barbaro implies that the neighborhood itself is a political liability for Romney because he is surrounded by a number of openly gay families in committed relationships:

It turns out that Mr. Romney — who has likened President Obama’s policies to socialism, called for cutting back on federal funding to PBS and wants to outlaw same-sex marriage — has moved into a neighborhood that evokes “Modern Family” far more than “All in the Family.” (There are six gay households within a three-block radius of his house, neighbors said.)

“Can I call bull on this, for a second,” Melber interrupted. “I want to call bull on both the substance of the story and the way the New York Times dealt with it.”

Melber said he likes and reads the Times, but said that the paper used a campaign reporter to essentially publish a hit piece on Romney’s wealth and policy positions and disguised it as a human interest story in a non-political section. Melber called it a “thin, silly story” and “an attempt – implicit or otherwise – to draw connection between [Romney’s] personal wealth and his candidacy.”

“I think this has got two strikes on it and probably shouldn’t have run,” said Melber.

Kantor stepped in at this point and defended her colleague and the Times. She said that the human interest and drama behind what happens to a presidential candidate’s home after they run for office is a valid story.

Host Alex Wagner interjected, “it is a political story.” She noted that articles focus on gay marriage and Romney’s efforts to get his neighbors to stop smoking marijuana. Kantor said that Times readers spend a lot of time trying to “reedit” their stories. Melber interrupted, “it’s because we care.”

Huffington Post political reporter Sam Stein noted that he believed that the New York Times is not running this story because it is biased against Republicans and that notion is simply “silly.” His fellow panelists quickly mentioned that they had not suggested that the paper was biased.