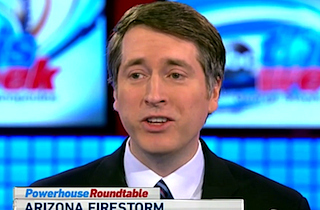 On This Week With George Stephanopoulos Sunday morning, National Review’s Rich Lowry defended Arizona’s SB 1062 — the just-vetoed bill that would have allowed business to refuse service to members of the LGBT community — from charges that it created Jim Crow-style laws against gay people.

“It’s different than the situation in Jim Crow south, when you had a state-sanctioned system of discrimination that was flatly unconstitutional,” Lowry said, “and you had a governmental interesting in ensuring that you could travel in South, which you couldn’t do if no hotel or no restaurant would serve you. In this case, the wedding industry is not bristling with hostility to gay people. You’re dealing with the occasional baker or florist who has a genuine conscientious objection. And if they do, you can find another baker or florist.”

“If you own a coffee shop and you refuse to serve a gay person, one, you’re an idiot,” Lowry said. “Two, you’re not going to have a defense under this law because serving someone coffee is not a burden on your religion. The cases we’re talking about that are relevant here is bakers, florists, photographers who are evangelical Christians or Catholics who say, ‘I don’t have any problem with gay people, but I don’t want to participate in a gay wedding because I have conscientious objections to it.’ There have been cases where people have been punished for that, reported to the authorities for sanctions or fines. That is wrong. That is what is trying to be addressed here.”

Arizona Governor Jan Brewer vetoed the bill Wednesday after a week’s worth of criticism from GOP lawmakers and the business community.