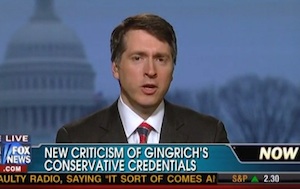 The National Review‘s Rich Lowry appeared on Fox News’s America Live to talk about his publication’s editorial which urged Republicans “to have the good sense to reject a hasty marriage to Newt Gingrich, which would risk dissolving in acrimony.”

“He’s accomplished a lot,” acknowledged Lowry. “He’s obviously a hugely talented guy, probably the most talented politician of his generation, right up there with Bill Clinton. But like Bill, he has big flaws, and in the case we try make in this editorial a general election candidate, without enough upside potential as president in our minds because if there’s one guy in this field who might just wake up one day on the wrong side of the bed and decide he’s going to cut a grand deal with Nancy Pelosi it would be Newt Gingrich. ”

“He is so hugely impressive on that debate stage, no one else would think of mentioning electric membership co-ops, you know, that’s Newt Gingrich, the wonk,” Lowry conceded. “But that was really his worst exchange of the night because he cannot defend those payments. He got $1.6 million from Freddie Mac to influence him, to keep him basically on their team and to pretend as he does that they’re giving him this money out of the kindness of his heart because he was an historian is just ridiculous and Ron Paul and Michele Bachmann, I thought were very effective on hitting him on that point.”

Watch Lowry’s criticism of Newt Gingrich below via Fox News: