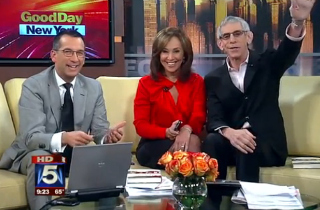 Stand-up comedian and actor Richard Belzer, best known for his role in Law and Order: SVU, appeared on Fox affiliate WNYW’s Good Day New York this morning to discuss his new book about famous historical cover-ups in American history. At the end of the segment, Belzer did his best to make everyone uncomfortable by making a rape joke and comparing the local station’s mothership Fox News to the Nazi regime.

As all local morning shows do, the segment got a bit goofy when co-host Rosanna Scotto asked Belzer whether her colleague Dave Price — who looks a bit like the actor — could possibly play Belzer’s brother on SVU.

“If he gets molested and banged in the ass,” Belzer replied to the two hosts’ awkward grins. Scotto sighed and attempted to rush the segment’s end. They all laughed and joked about there not being a five-second tape delay, with Belzer jokingly clarifying he meant that Price would bang into a desk or similar household item.

But Belzer continued his antics, delivering a mocking Nazi salute and shouting a “Sieg Heil to all your colleagues at the other division.”

And in case Belzer’s joke confuses you, his rep issued a handy statement clarifying that it was a “satirical gesture toward Fox News, whose ideology he is opposed to.”

Watch below, via WNYW: