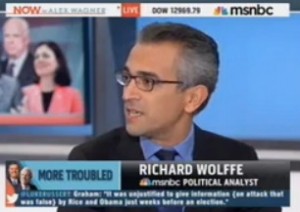 On the heels of Ambassador Susan Rice‘s meeting with the John McCain posse this morning, MSNBC’s Now with Alex Wagner opened Tuesday’s show by assessing the Arizona Senator’s vendetta against President Obama‘s likely pick to succeed Secretary of State Hillary Clinton. To hear Sens. John McCain (R-AZ), Lindsey Graham (R-SC), and Kelly Ayotte (R-NH) tell it, things didn’t go well, but MSNBC’s Richard Wolffe reiterated that what’s going on here is really part of “a witch hunt for every prominent person of color that has ever served alongside this president,” and that Ambassador Rice is “a proxy for this president.”

The Three Rice-Burners shockingly came out of their meeting with Ambassador Rice and acting CIA Director Michael Morell even more determined to torpedo Amb. Rice’s possible nomination as secretary of State. Ironically, they offered self-assessments that were tough to argue with; Sen. McCain said he was “significantly troubled,” while Sens. Graham and Ayotte were alternately “more disturbed” and “more troubled” than they already were, as if that’s possible. You definitely have to be significantly troubled and disturbed to think that Amb. Rice has done anything to deserve this treatment by the McCain Gang.

Host Alex Wagner pointed out that Sen. Ayotte’s big takeaway from the meeting, the cause of the Obi-Wan Kenobi-like  “disturbance” that she felt, was that Ambassador Rice told her that the information she was given to use on those Sunday shows was “wrong.”

“Clearly the impression that was given, the information given to the American people, was wrong,” Ayotte told reporters. “In fact, Ambassador Rice said, today, absolutely it was wrong and that’s troubling to me.”

This is why people think these senators must either be crazy, or up to something funny, because the completely obvious thing thing that has Ayotte quavering like a jackhammer operator doing a Bill Clinton impression is exactly the thing John McCain said would clear the whole thing up:

That’s why longtime MSNBC contributor and MSNBC.com Vice President Richard Wolffe explained to Alex Wagner that opposition to Amb. Rice is 50% based on her prospective nomination, and 50% on the fact that she’s “a proxy for this president. I’ve said it again, and will say it again, there has been a witch hunt for every person of color that has served alongside this president.”

Fox News’ Greta Van Susteren has criticized Wolffe and Touré for making this sort of critique, but placing it in the familiar denialist frame that “not every challenge or criticism of anyone who happens to be African American is racist,” and quotes a Fox News article that describes Wolffe as saying “there’s no legitimate reason” to oppose Amb. Rice’s nomination.

That’s not what Wolffe, or anyone else, is saying; we’re saying that these reasons are not legitimate, that McCain himself once defended a prospective Secretary of State named Rice because she gave the information that was given to her, that Amb. Susan Rice is self-evidently not “incompetent” or lacking in brightness, and so there must be something else at play here. If this were simply about obtaining a prominent political scalp, McCain and Co. might try going after the actual Secretary of State, Hillary Clinton, who actually is responsible for what goes on at U.S. diplomatic facilities, but Hillary Clinton is not an easy target, and she’s not a proxy for President Obama. She has her own, distinct political identity.

The “racial motivation” behind this is nearly moot; like Greta Van Susteren, I don’t believe that John McCain is a “racist,” and I have a great deal of personal respect and admiration for everything he’s done outside of politics, and some of what he’s done within it. John McCain and his crew just happen to operate on a playing field that rewards attacks on people like Ambassador Rice, or Valerie Jarrett, or even First Lady Michelle Obama and her social secretary, Desireé Rogers. They operate within a bubble of white privilege in which they’re not always conscious of the way they speak about people, or of why, and they refuse to admit that President Obama rankles them because he represents the overthrow of that privileged establishment, even though they keep saying it out loud.

Unlike other liberals, though, I am loath to try and stop the McCain Scrutiny of Ambassador Rice, because it will end very badly for Republicans. Americans have already decided that there was no attempt to mislead in Benghazi, even with the amazing job the mainstream media has done of abetting that narrative. Eventually, Sen. McCain and his cohorts will wind up face to face with Ambassador Rice, on TV, for the entire country to see, and they’ll hear her calmly explain her qualifications, and respectfully respond to these unfounded attacks, and that visual will be deadly for a Republican Party that has earned it.

Here’s the clip, from MSNBC’s Now With Alex Wagner: