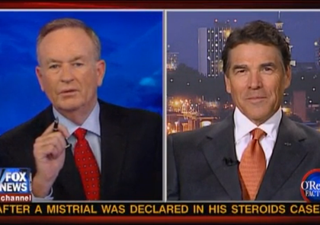 It took a precipitous drop in national polls and several perilously shaky debate performances, but Rick Perry is finally taking Bill O’Reilly‘s media advice and came on the Factor. Perry discussed his new tax plan, his relationship with Mitt Romney (“I don’t know whether there’s strain, but…”), and admitted that calling Republicans “heartless” for opposing his stance on immigration was probably a bad move.

O’Reilly began the first segment of the interview with the tax plan and, specifically, the difference between his flat tax option and Herman Cain‘s 999 plan. Perry suggested that, running a state that does not have sales taxes, Cain would find his biggest challenge to be selling the sales tax on a federal level, both to states like Texas and those that already have a sales tax in place. O’Reilly’s questions became more pointed in the second segment, however, where he asked Perry to assess the problem with his campaign as it is now, and what mistakes he has made that he plans on correcting.

“These debates are set up for nothing more than to tear down the candidates,” Perry replied, arguing that debates were “pretty hard” and “if there was a mistake made, it was probably ever doing one of the campaigns [debates] when all they’re interested in is stirring up between the candidates instead of really talking about the issues that are important to the American people.” While he did agree that calling Republicans “heartless” on the immigration issue was “the wrong word,” he persisted that he had been strong on immigration despite the federal government being “a total and abject failure.”

Then the conversation turned more personal, as O’Reilly pushed Perry on his relationship with Mitt Romney. “These guys would be hitting each other if assault was legal” was O’Reilly’s (and O’Reilly’s body language expert’s) opinion on their chemistry, and Perry didn’t seem to deny it too much, only saying he didn’t know “whether there’s strain.” Instead, he suggested that Romney had changed his positions too often, and was cut off by O’Reilly: “So you think he’s a weasel, you think he doesn’t have any principle.”

Again, Perry didn’t entirely deny this, instead noting that he had been “consistent all my life” on issues like abortion and “domestic marriage” (?), and asked rhetorically, “How do you change at the age of 50 or 60 positions on life, positions on guns, positions on traditional marriage?”

Overall, the interview was one of Perry’s better performances of the day, and after several debates that lost him plenty of followers and bizarre comments about the President’s birth certificate, Perry should hope this is the most memorable appearance he did today.