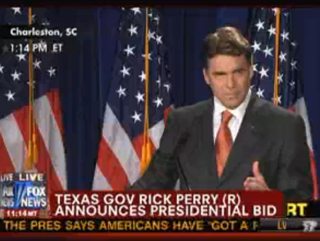 Texas Governor Rick Perry is officially a candidate to the presidency in 2012.” “Howdy!” he shouted at the crowd, introducing them to his wife and high school girlfriend, promising them he would work to “make Washington, D.C. as inconsequential in your lives as I can” and set them “free from the shackles of an overbearing federal government.”

Gov. Perry was speaking in Charleston, South Carolina at a gathering for the blog Red State, where editor Erick Erickson introduced him. He began by introducing himself and his wife, explaining that he came from a place “too small to be called a town” and that he believes in America as “the last great hope of mankind” because “as Americans, we’re not defined by class and we will never be told our place.”

He then turned to the economy, noting that the national debt was out of control, and increasing that debt would lead nowhere. “You can’t win the future by selling America off to foreign creditors,” he declared, attacking both the President and his appointees– everyone from the top business advisers to the Treasury Department. That led to foreign policy, where he called President Obama an “abject failure” on border control and accused him of “apologizing for America” and “insulting our friends and befriending out enemies.”

But it wasn’t all red meat against President Obama– he explained how, despite being 10% of the population, Texas had about 40% of the nation’s job growth. And he noted that while “I know I’ve talked a lot about Texas,” he “first and foremost, I’m an incredibly proud American.” He then declared his intentions to run, and made a simple, pretty libertarian promise: “I will work every day to make Washington, D.C. as inconsequential in your lives as I can, and free our families, small businesses and states from a burdensome and costly federal government so they can create, innovate and succeed. With the help and courage of the American people, we will get our country working again.”

The speech via Fox News below: