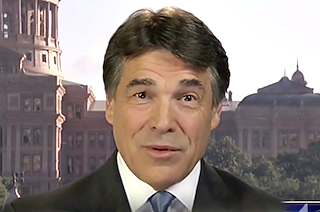 Texas Governor Rick Perry appeared on Fox News Sunday this morning to promote his anti-abortion legislation currently being considered in the Texas Capitol and defend the remarks he made about the bill’s most prominent opponent, Democratic Texas Senator Wendy Davis.

Following Davis’s unlikely but successful filibuster of the abortion legislation two weeks ago, which effectively killed the bill and forced Perry to call a second special session to pass it, Perry attacked Davis personally. “She was a teenage mother herself,” he told a conservative audience, to applause. “She managed to eventually graduate from Harvard Law School and serve in the Texas Senate. It’s just unfortunate that she didn’t learn from her own example, that every life must be given a chance to realize its full potential.”

Even among Texas Republican lawmakers thought Perry had crossed the line with his remarks.

“Those comments were meant to be a compliment to her for what she had accomplished in her life,” Perry said Sunday morning. “You think about where she came from and what she’s accomplished, I would think she’s very proud of that as well.”

Perry also denounced the protest in the Capitol rotunda that helped derail the bill at the last moment by yelling so loudly that the Lieutenant Governor David Dewhurst was unable to call the Senate to a vote. “People have relayed to me that never in the history of Texas have we seen that kind of mob rule come in and discombobulate a legislative session,” Perry said.

“I think you’re misrepresenting what I’m saying here,” Perry said. “It was the gallery that was out of control, literally out of control, with no ability to hear what was going on on the Senate floor. I think anybody who watched that would consider it to be mob rule…The Senate officials will not let that happen again.”

Perry was certain that the legislation would pass in the second special session, in which he has suspended the rules requiring two-thirds vote to bring a bill to a vote.

“I’m pretty good at counting votes,” Perry said. “We will get this done and get Texas back focused on economic interests.”