Rick Perry Declares Himself ‘The Tim Tebow Of The Iowa Caucuses’ 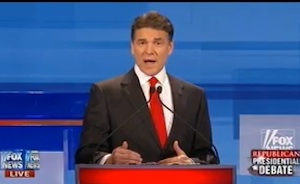 Rick Perry may have delivered the line of the night when he compared himself to Denver Broncos quarterback Tim Tebow during Thursday’s Iowa debate, hosted by Fox News. Moderator Neil Cavuto asked the Texas governor about his lackluster debate skills and how he would fare going up against an accomplished debater in President Obama.

RELATED: Rick Perry On His Recent Gaffes: Voters ‘Aren’t Looking For A Robot’

“I want to share something with you, as each one of these debates — I’m kind of getting where I like these debates!” Perry exclaimed. “As a matter of fact, I hope Obama and I debate a lot. I’ll get there early! And we will get it on and we will talk about our differences which are great. I’ll talk about what we have done in the state of Texas and talk about passing a balanced budget amendment to the United States Congress. I’ll talk about having, the type of part-time Congress that I think Americans are ready for. You know, there are a lot of people out there, I understand it. There are a lot of folks that said Tim Tebow wasn’t going to be a very good NFL quarterback. There are people that stood up and said, ‘well, he doesn’t have the right throwing mechanisms, or he doesn’t — you know, he is not playing the game right.’ You know, he won two national championships and that looked pretty good. We’re the national champions in job creation back in Texas. But am I ready for the next level? Let me tell you, I hope I am the Tim Tebow of the Iowa caucuses!”