Rick Perry Fires Back At Nancy Pelosi Over Her Twitter Zing 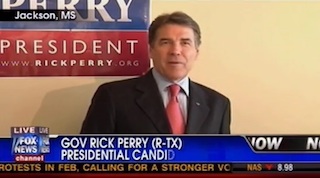 Yesterday, Rick Perry decided to challenge Nancy Pelosi to a debate, thus setting up Pelosi for the obvious alley-oop that was a Rick Perry-impression (or a “late night talk show host doing an impression of Rick Perry”-impression). Perry has since responded by bringing up the 60 Minutes story that alleged insider trading on the behalf of folks like Pelosi and John Boehner. Today on America’s Newsroom, Karl Rove helped theorize whether or not any of this will help Perry in the long run.

First, both Rove and Fox News’ Bill Hemmer asked the question that’s on everyone’s lips; Why on earth is Rick Perry, that Rick Perry, challenging anyone to a debate at this point. Rover didn’t seem to think it was a great idea. However, he theorized that the high-profile exposure with this and all his campaign ads might help plug the holes in Perry’s sinking boat. However, could it be too late?

“I don’t think I would have challenged somebody to a debate. Just simply raises all of those memories of bad moments during his debate performances. But, look, he is spending a lot of money on television. He issued two substantive policy statements in the last several weeks, one on reform of congress. That is pretty good. My suspicion, we’ll see he bottomed out and this has helped him to stabilize himself. The problem is he is stabilizing himself in a very low position.”

Of course, no one is pointing out one of the bonuses to challenging Pelosi to a debate; there wasn’t a chance in hell she was going to accept. Why would she? Perry might as well have challenged Dracula to an arm wrestling match (that would make an amazing campaign ad).

Still, Perry seems to have moved his target squarely onto the Obama administration with this challenge and his “pathetic” anti-Obama ad. Only time will tell if this will help him or if it’s foolhardy to forget the people he’s actually running against, a number of whom are moving steadily farther up in the polls.